Contemporary climate change includes both the global warming caused by humans, and its impacts on Earth’s weather patterns.

We inspire and train diverse youth to be effective leaders in the environmental, climate, and social justice movements. 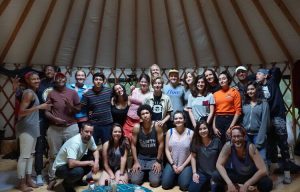 Using art, music, storytelling, on the ground projects, civic engagement, and legal action, we advance solutions to the critical issues we face as a global community.

Earth Guardians represents thousands of young activists, artists, and musicians that are on the front lines driving action and fueling the cultural shift toward a regenerative future.

Earth Guardians is an inter generational organization that trains diverse youth to be effective leaders in the environmental, climate and social justice movements across the globe – using art, music, storytelling, on the ground projects, civic engagement and legal action to advance solutions to the critical issues we face as a global community.

Our Regional Directors host monthly crew calls to ensure all information between the Core Team and our crews is flowing, and that you have what you need. If you do not have a Regional Director in your area, you will have the opportunity to work with one of our Crew Success or Crew Engagement Managers directly.

If you are looking for a dynamic youth leader for your event, someone who represents the youth voice and vision of Earth Guardians, you’ve come to the right place. We’ve undergone a rigorous selection process to bring you the most engaged, powerful, and inspirational speakers from the Earth Guardians global community.

The Earth Guardians Youth Council acts as the youth decision making body to guide EG projects and programs. We work to amplify the impact, connectivity and clarity of EG’s branding,  initiatives, projects, partner campaigns and curriculum. We are ensuring the representation of the youth voice in the realization of the greater Earth Guardian mission to build a healthy, just, and sustainable world.

Our team makes it possible for the earth guardians to do what they do best. From office maintenance and taking out the compost to brainstorming and campaign support. This team works behind the scenes to make the movement move.

We are in a critical moment of history where there is power in numbers and strength in alliances. At its core, Earth Guardians is defined by its community, and the ways in which we respect, honor and work with our partners. We partner with businesses and organizations to create awareness and strengthen the climate, environmental and social justice movements at large.

FFF, is a youth-led and -organized global climate strike movement that started in August 2018, when 15-year-old Greta Thunberg began a school strike for climate. In the three weeks leading up to the Swedish election, she sat outside Swedish Parliament every school day, demanding urgent action on the climate crisis. She was tired of society’s unwillingness to see the climate crisis for what it is: a crisis. 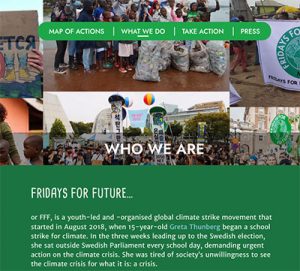 To begin with, she was alone, but she was soon joined by others. On the 8th of September, Greta and her fellow school strikers decided to continue their strike until the Swedish policies provided a safe pathway well under 2° C, i.e. in line with the Paris agreement. They created the hashtag #FridaysForFuture, and encouraged other young people all over the world to join them. This marked the beginning of the global school strike for climate.

Their call for action sparked an international awakening, with students and activists uniting around the globe to protest outside their local parliaments and city halls. Along with other groups across the world, Fridays for Future is part of a hopeful new wave of change, inspiring millions of people to take action on the climate crisis, and we want you to become one of us!

Sunrise’s Principles are guidelines which we all commit to upholding. Any action, member, or group that does not embody these principles are not a part of Sunrise.

Sunrise’s Principles
1. We are a movement to stop climate change and create millions of good-paying jobs in the process. 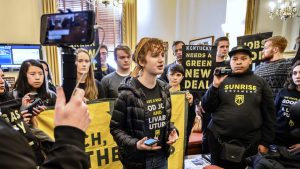 end the corrupting influence of fossil fuel executives on our politics, and elect leaders who stand up for the health and well being of all people.
2. We grow our power through talking to our communities.
We talk to our neighbors, families, religious leaders, classmates, and teachers, in order to spread our word. Our strength and work is rooted in our local communities, and we are always growing in number.
3. We are people from all paths of life.
We are of many colors and creeds, from the plains, mountains, and coasts. A wealthy few want to divide us, but we know our differences make us stronger. We are united in the shared fight to make real the promise of a society that works for everyone. Our country has enough for all of us.
4. We are nonviolent in word and deed.
Remaining nonviolent allows us to win the hearts of the public and welcomes the most people to take part. We need maximum participation in order to achieve our goals.