Isra Hirsi is the 16-year old co-founder and co-executive of the US Youth Climate Strike, the 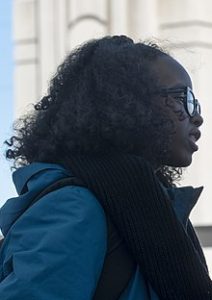 Inspired by the Flint water crisis, Isra fights for climate justice. As a black Muslim woman, she emphasizes the importance of intersectionality in the movement for climate justice. She is also a part of MN Can’t Wait, a youth coalition of organizations calling upon the Minnesota government to take action. Isra Hirsi (born February 22, 2003) is an American environmental activist. She co-founded and served as the co-executive director of the U.S. Youth Climate Strike. In 2020, she was named in Fortune‘s 40 Under 40 Government and Politics list.

Hirsi grew up in Minneapolis, Minnesota, and is the daughter of Somali American U.S. Congresswoman Ilhan Omarand Ahmed Abdisalan Hirsi. At the age of 12, she was one of the participants protesting for justice for Jamar Clark at the Mall of America.] Hirsi attended Minneapolis South High School, from which she graduated in 2021. She became involved in climate activism after joining her high school’s environmental club in her freshman year.

Hirsi coordinated the organization of hundreds of student-led strikes across the United States on March 15 and May 3, 2019. She co-founded the U.S. Youth Climate Strike, the American arm of a global youth climate change movement, in January 2019. She acts as the co-executive director of this group. In 2019, she won a Brower Youth Award. That same year, Hirsi received the Voice of the Future Award. In 2020, Hirsi was placed on BET‘s “Future 40” list.

It is reported that Hirsi will attend Barnard College of Columbia University in fall 2021.